A non-profit healthcare organization on the Southside has brought the AIDS Memorial Quilt to Danville. PATHS CHAAP services helps treat people who have been diagnosed with HIV, and they presented the quilt earlier Saturday.

The AIDS quilt started in 1987, and now weighs about 54 tons, when it's all put together. The quilt serves as a tribute to those who have lost their lives from AIDS. Portions of the quilt are all over the country, but the quilt was in Danville this month for the first time ever.

For those who have HIV or know someone who has it, the AIDS quilt is very important and meaningful. HIV advocate Tom Salyer was diagnosed in 2001. Seeing the quilt brought back some emotional memories from when he first saw the entire thing back in 1996. "I was there with a friend who at the time had AIDS, it was very powerful , it was very emotional for me he has since passed away, so today, being able to speak in his memory is something that I'm very proud to do," Salyer said.

PATHS CHAAP Manager, Carol Napier was the person who wanted to bring the quilt to Danville. She says for her, the quilt brings her back to the 1980s, when thousands were dying from the disease. "They were dying without family, without friends, without any support and they were abandoned and so the quilt to me and to many is a way to make amends for that very undignified way of passing out of this world," Napier said. Napier treats patients that have HIV everyday and says she hopes bringing the quilt to Danville will help educate people about the disease. "There's an increase in incidents here, and it's impacting this community in a way that I don't think the community understands. So awareness is the key, when people talk about it, they learn about it, and when they learn about it, you do better," Napier continued.

If you look at the entire quilt at one minute per each block: it would take you 33 days to see the whole thing. If you'd like to take a look at the portion of the quilt, it's at the Danville Museum of Fine Arts and History for the rest of January. 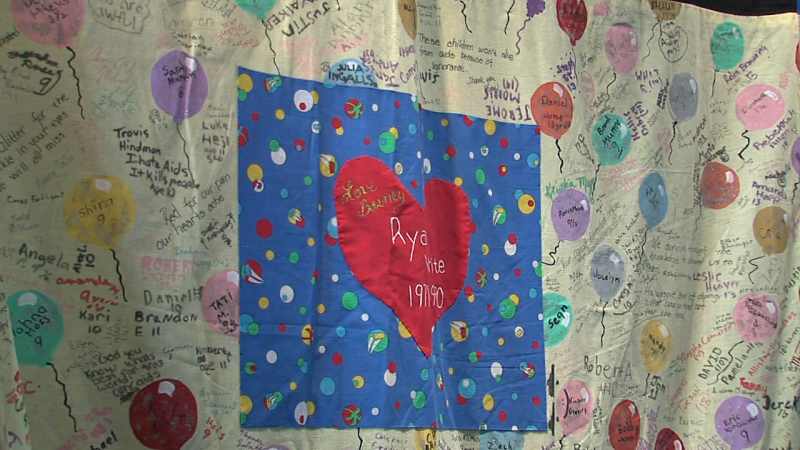 As reported by WSET ABC13 News.  Video available at:  http://www.wset.com/story/20511842/aids-quilt-comes-to-danville