In the past six years of working at Piedmont Access to Health Services, Carol Napier has seen 20 of her clients die from HIV/AIDS complications.

She recalled their memory tearfully on Saturday afternoon at the Danville Museum of Fine Arts and History.

Napier serves at PATHS Community HIV/AIDS Assistant Program services manager and has worked with the museum to bring a piece of the AIDS Memorial Quilt to Southside. A presentation for the quilt was held Saturday with more than 50 people in attendance.

Nominated for the Nobel Peace Prize, the AIDS Quilt is an enormous — 1.3 million feet — quilt memorializing people who have died from the disease. The piece in Danville has several panels of names on it – two are for Ryan White, one of the disease’s most famous victims. Each of the names were read at the presentation and a there was a moment of silence for each person.

Napier and PATHS Executive Director said the quit was brought to Danville to raise awareness of the vicious disease which has plagued the nation since the 1980s. However, Crane said the fight is not over and now because of enhanced treatments over the years, HIV has been downgraded from being a fatal disease to a chronic condition.

But raising awareness about those who suffer from it and prevention is still important, even in Southside. PATHS treats many HIV/AIDS patients in the Dan River Region and its employees see the toll it can take on people.

At the presentation Tom Salyer, who is from Martinsville, emotionally told the crowd about how his diagnoses with the disease left him in deep despair, but because of the availability of institutions like PATHS and community support he was able to become and advocate for other with HIV/AIDS and start a support group.

Willie Wilson from South Boston said she lost her son to the AIDS virus and has worked to try to raise awareness in Southside in honor of him. And just because she lives in a small place does not mean the disease doesn’t affect the area.

“I don’t have a degree in medicine or psychology or anything like that,” said Wilson. “But I can listen and I can give advice.”

Adam Thompson drove all the way from Charlottesville to the event and he recalls the days when doctors were unprepared to deal with AIDS and places like PATHS have made treatment and coping a lot better for people suffering from the disease.

The AIDS Quilt will be on display at the museum the entire month of January. 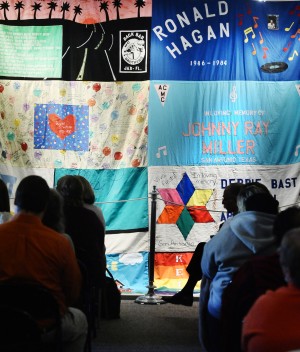