Only eight panels of more than 94,000 are hanging on display in Danville. 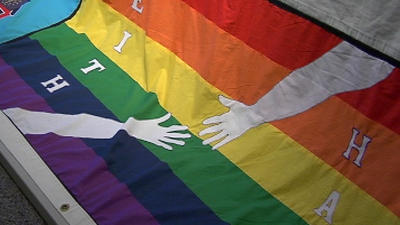 It may be the largest quilt in the world, covering more than one million feet and weighing 54 tons.  The AIDS Memorial Quilt is now in our area paying tribute to thousands  who have died of the disease.

One in five people have HIV or AIDS in the United States and don't even know it.

It's those eye opening numbers that make the quilt a traveling testimony of the deadly effects of the disease.  "Back in the '80's people were afraid. There was an enormous about of stigma, which still remains," said Carol Napier, an HIV and AIDS specialist with PATHS.  Eight quilt squares hanging under soft light in Danville serve as a memorial of men and women who died from HIV or AIDS.

"It's grown to 94 thousand panels, over 94,000 panels. It's international now," Napier said.  Each unique square represents a life with a name, special phrase and characteristic of each person.

Napier asked for the small section to come to Danville.

"This is a way to dignify those very undignified ways of leaving this earth. So this is to let the know you're gone, but you're not forgotten," Napier said.  "You've had time to look at this, what does this mean to you?" asked WDBJ7's Justin Ward.  "These are people. These are lives. These are lives that are lost, particularly Ryan White," Napier said.

White sparked a national conversation about AIDS after he was diagnosed at 13.  "He became internationally known because of the stigma and discrimination that he faced as a child. And he was so brave and poignant for his age, he went before congress," Napier said.  Two quilt squares memorialize his efforts to bring attention to the disease.  After his death at age 18, Congress passed the Ryan White Care Act, which provides billions in funding for medical treatment and medicine for people with AIDS.  "He knew he had a voice. So he used that voice," Napier said.

Napier works with AIDS and HIV patients daily.  She says treatment is continually advancing and most people taking treatment live long lives.  This section of the quilt will be on display here at the Danville Museum the entire month of January.  There is no cost to see the quilt.

This article was originally published at: http://www.wdbj7.com/news/wdbj7-section-of-aids-memorial-quilt-travels-cross-country-to-danville-20130108,0,2209099.story