“He was horrible,” Baker said. 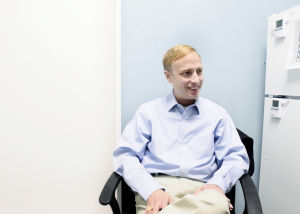 When Baker was 7 years old, the pediatrician gravely took his mother out of the exam room and told her he needed blood work, suspecting leukemia.

Alone in the exam room, Baker overheard the conversation. He was scared to death, thinking he was going to die.

He didn’t have leukemia; but the experience of feeling scared, confused and left out would shape his life’s work.

“There is nothing I would discuss with a parent I wouldn’t discuss with a child,” he said. “I try to do a good job communicating with the parents and being honest with the kids as well.”

He has worked in private practices in Abingdon and South Carolina, and served as a pediatrician for Tazewell Community Hospital. He has also been on medical mission trips to places such as Haiti, Peru, Ecuador and Belize. Most recently, he was the medical director of the Children’s Hospital After Hours Clinic at the Medical University of South Carolina, where he was assistant professor of pediatrics.

Baker is glad to have the opportunity to serve a wider community. At Piedmont Access to Health Services, he said, he can serve families with private insurance, Medicaid or no health plan.

Baker settled on his career choice at 11, started college at 15 and was delivering babies at 21 to mothers who didn’t trust his young face. Baker is a graduate of Hampden-Sydney College and the Medical College of Virginia.

His late father was a police officer, and his mother was a stay-at-home mom who became a library assistant to help him through college. Baker says his family drew him back to Virginia. Vienna is his hometown.

“I needed to get back closer to home,” he said.

A physician recruiter sent his information to PATHS, but PATHS was not looking for a pediatrician. Nevertheless, he managed to get an interview.

Baker works four days a week for PATHS. In his spare time, he likes to travel, read, run and practice yoga — and serve as an Episcopalian priest. The same day he interviewed with PATHS, Baker interviewed at Epiphany Episcopal and was offered a place on its staff.

Baker grew up attending church with his parents, continuing to go through college and medical school, but later experienced a spiritual crisis.

“Organized religion was not only not meeting my needs, it was making me feel worse,” he said.

Instead of leaving his faith, he decided to go deeper, enrolling in seminary at the Candler School of Theology at Emory University.

“It was never a lack of faith as much as a recognition that organized religion isn’t meeting the needs of people,” he said.

At the time, Baker told himself there were three things he would never do.

“You can see me do all three things at Church of the Epiphany on Wednesday and Sunday,” he said, laughing.

His responsibilities at Epiphany include evangelism and hospitality. As the associate rector for congregational development, his attention is on bringing in new people and making them comfortable. He also conducts chapel services for Epiphany Episcopal’s students.

Baker wrote his thesis about the intersection of faith and medicine. He sees his two roles as seamless, caring for people and their physical and spiritual needs.

However, he notes, if one sees him in the doctor’s office, “I’m not going to try to get you to come to my church.”

Very slim, Baker admits he wasn’t always that way, weighing more at 11 years old than he does at 47.

“There’s nothing worse than a skinny person telling you how to eat,” he said.

He’s hoping to make meaningful connections with his patients and their parents.

“Kids are a lot of fun, even when they’re sick,” he said. “They have an amazing ability to heal and get well.”

Baker said he enjoys working with parents, too.

“Take good care of their child when they’re sick, and they’re your friends for a lifetime,” he said.

Article originally published in the Danville Register & Bee on January 23, 2013.  View the article at: http://www.newsadvance.com/go_dan_river/entertainment_lifestyles/lifestyles/article_87f2c06a-64fd-11e2-809d-0019bb30f31a.html